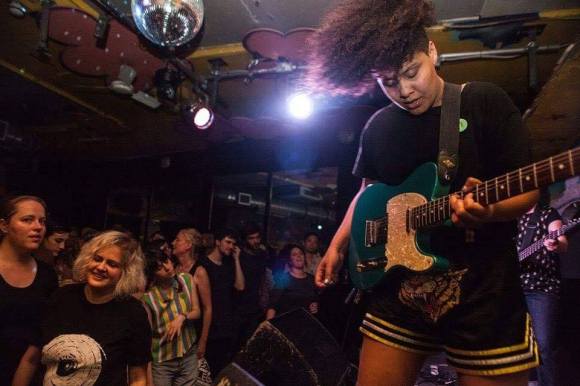 Very few people have made such an impact on DIY punk music as guitarist and singer Rachel Aggs. She came to most people’s attention in 2009 as part of punk trio Trash Kit. Their sound is complex, channelling experiment bands like The Raincoats and Marnie Stern with melodic harmonies and polyrhythmic drum beats. She went on to form the ultimate post-punk party band Shopping whilst also playing in the pop duo Sacred Paws.

Loved by music nerds, punks and pop fans alike, she’s an under appreciated staple on the DIY punk scene and as a musician her melodic guitar has become as recognisable as her sung-spoken vocals and tumultuous hair do that always covers her face ever so slightly. Her fame is slowly starting to rise though; Aggs was recently named by i newspaper as one of the unsung heroes of British indie music and has gone on tour after tour with Shopping, the hardest working band in punk.

Read the full article at Gal-Dem.

I don’t always get paid for writing so if you’ve liked my pieces and want me to write more you can donate a couple pennies to keep me going in between paid work.